… deep in colour, rich flavour, with nuances of nut and coffee..

… and made from green walnuts, picked at around the time of the Feast of St. John at midsummer in June. 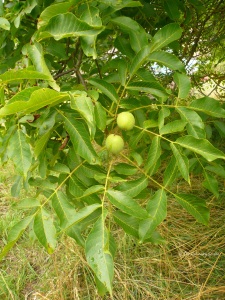 Green walnuts, sliced and quartered, steeped in alcohol (vodka) and brown sugar for about two to four months (depending on which recipe) before being filtered and left to mature for another couple of months …

Once the wheel of time has turned through to June again, I will show you how!

In the meantime, mark my words: it is well worth the effort! The first of four orchard liqueurs I will be sharing with you during Advent (more on this ancient European tradition under The Cultural Landscape), Walnut Liqueur is both a digestif and a fine flavouring for desserts.

Walnuts are also one of the original planting recommendations for an orchard as included in the St Gallen monastery plan from the Early Middle Ages… more on that in The Traditional Orchard Story.