For the Germans, the only time to bake “Plätzchen” is once it starts to get dark – in the sense of the dark time of the year, like now (more on that here: Advent: Fading Light and Candle Light).

(“Plätzchen” are to be distinguished from “Kekse” which – in this day and age – are seldom homemade and as such sanctioned for consumption all year round).

And no, I cannot explain the logic. I am not German 🙂

(But if there are any German readers out there who can, I would love to hear from you!)

In the Anglo-Saxon tradition we like a biscuit or two with our tea (or coffee) anytime of the day or year and when I come up with biscuits (homemade, always) here in Germany at any time other than pre-Xmas I get

“Yes, we make those at Christmas” comments intended to help me along with my social integration efforts… 🙂 (doesn’t stop them helping themselves mind you…)

But when the Germans do the homemade biscuit thing in the Festive Season, they do it properly… the names alone tell you that: Cinnamon Stars… Christmas Stars… Vanilla Crescents… Black-and-White Biscuits… Macaroons… Hazelnut Kisses… and of course:

Lebkuchen – an umbrella term covering a multitude of spicy, nut-based confections, some of which are related to the gingerbread for which the capital of Franconia – Nuremburg – is so famous and with which its streets are more or less paved at this time of year – in the figurative sense at least!

And this year I was introduced to “Lebkuchenglocken” (“Lebkuchen bells”) for the first time – wooden moulds with a screw function for producing uniformly-domed lebkuchen (Ordnung muss sein 🙂  ), but you can make them without the moulds, using a knife dipped in water to create the domed effect.

Mini-Kraut and I put the Lebkuchenglocken to the test this year and were well-pleased with our efforts. 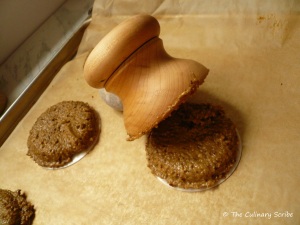 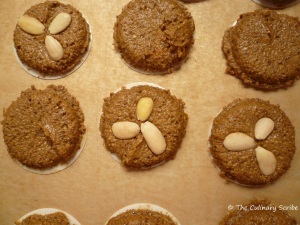 For the sugar icing:

For the chocolate covering: