To blog on or not to bother?

I have decided to carry on bothering.

Because, in recent years, much of what I have assimilated and implemented in the place where I am has come from a very broad band of bloggers.

People who bother to blog. In whatever language. All of them blogging out of conviction and only the very thin minority blogging for remuneration of the financial kind.

I owe much to bloggers and have become convinced of the role (to be) played by alternative media in presenting  another side of any story. Because there are always two sides to every story. Which does not have to mean subscribing to either version but at least they point toward the third version: your opinion/independent thought/questions asked. Call it what you will, it is a real rarity where I am, both in time and place. George Orwell, Aldous Huxley: say no more.

And say no more I shall on this blog because I shall continue to keep politics out of it. Apart from the fact that the production and procurement of food have long since become a political act. Whether you realise it or not.

As a promoter of pomology past and present it is time to set the record straight on cherry plums and mirabelles. I know, right up there on top of everyone’s priority list…!

The thing is, I keep hearing (town) folk here banging on about the mirabelles being ripe. In July.

And when I (the foreigner with still slightly accented German who is supposed to be a translator by profession, and not a wannabe fruit farmer – very unGerman, diverging from the trodden path…), presume to tell them that its the cherry plums that are ripe now, in July, I get told: “well, they look like mirabelles”.

Ripen as early as the beginning of July, occuring in both red and yellow. 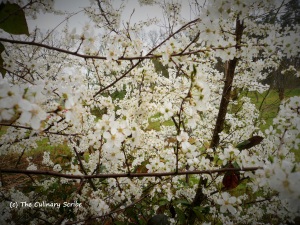 The very first of the stone fruit to blossom in the spring.

Slightly milder than mirabelle plums, their stones are smaller and yellow cherry plums are far more uniform in colour than mirabelles. Cherry plums are great for snacking on or for use in summer fruit salads. They make a very good purée, too (much less acid than some of the later plum varieties) and I also juice them as the basis for mulled beverages in the autumn and winter. 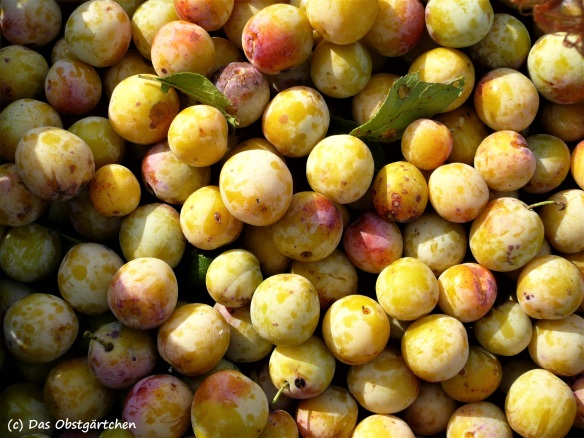 They ripen only in late August, early September and have distinctive “red cheeks” where the sun catches them.

Somewhat stronger in characteristic flavour than cherry plums, mirabelles are a good preserving fruit (although also great eaten straight from the tree on a later summer’s day), and very popular with schnaps distillers. Which I am not, so my mirabelles end up in bakes and purées – where they are reminiscent of their prunus relative, the apricot (Prunus armeniaca). 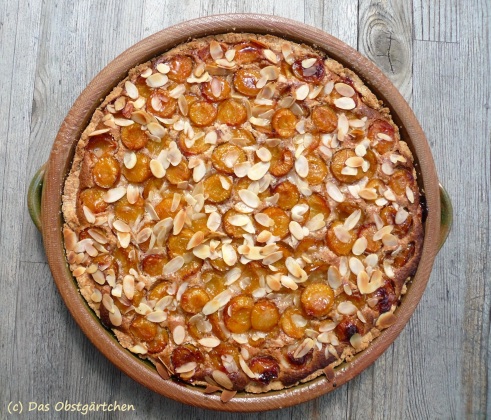 8 thoughts on “Cherry plums versus mirabelles”